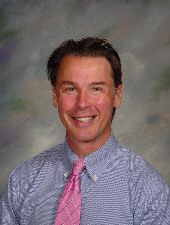 After five years as principal of William Winsor Elementary School, Brian Ackerman has accepted the position of Assistant Superintendent for the Dudley-Charlton Regional School District in Massachusetts. Steven Lamarche, Superintendent of Dudley-Charlton, reports that the search group unanimously selected Brian as a semi finalist.  Not surprisingly, the response from staff following Zoom meetings was “quite favorable.”

In commenting on this decision, Brian shared, “It has been an honor and privilege to serve the community in Smithfield. People here are welcoming, expressing a desire to be true partners in the education of all Winsor students. I also want to thank Dr. Paolucci and Dr. Monaco for fostering a climate of professional growth. We have accomplished a lot together.”  Ackerman also offered praise for his colleagues, stating, “the culture of putting students first and increasing achievement has been a top priority.”

The Winsor school community has blossomed under Brian’s leadership, focusing  on building students’ social-emotional skills and sustaining a culture of kindness, empathy, and respect. Students at Winsor have also benefited from positive changes to curriculum and instruction. Brian will begin his new position in July. We wish him the best of luck in his new position.